The City of Gothenburg – what’s in a name? 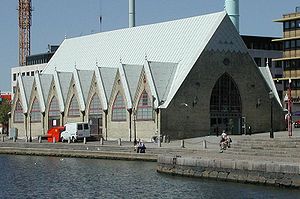 Feskekôrka (the "fish church") in Gothenburg

The Swedish business newspaper Dagens Industri reports that the Swedish city of Gothenburg has given up its attempt to go by its Swedish name (Göteborg) internationally, and has returned to using the name Gothenburg in English.

The English name is nothing new: according to the city’s web site, the official name Gothenburg dates from at least 1621, when it was specified on the city’s charter. Many European cities have names in languages not their own, also known as exonyms (think Copenhagen or Vienna), but Gothenburg is reportedly the only Swedish city to have one.

Why switch back? Apparently the city elders finally realized that English speakers have trouble with the name Göteborg. I could have told them that: my grandfather came from Gothenburg, and I have a “Göteborg” sticker with the city seal on the dashboard of my car. I’ve listened to many perplexed passengers tackle the name, and can report that it’s a world of trouble down to the last letter. (Try explaining the pronunciation of the final -rg in Björn Borg or Göteborg to an English speaker some time.)

As a translator I vastly prefer to use the familiar (indeed, ancient) English moniker in my translations, and I have in fact had this discussion with at least one agency which wanted to conform to the city’s policy. So I am glad that they have returned to using Gothenburg on an official basis.

how to treat tinnitus
This entry was posted in English. Bookmark the permalink.

1 Response to The City of Gothenburg – what’s in a name?